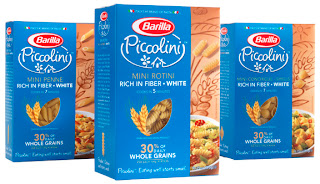 Last week, I was lucky enough to receive some samples of Barilla's new kid-friendly pasta, Piccolini.

To be honest, I know pasta doesn't need to be specially formulated to be kid-friendly - it's pasta, it is kid-friendly.

But this Piccolini is pretty great. Barilla has taken the classic Italian pasta shapes and made them in miniature versions that cook quickly. (7 minutes or less kind of quick).  And, Barilla has added fiber, so the Piccolini line has three times the fiber as regular pasta but tastes and looks the same as regular pasta.  And it's all made from natural flavors.

Because my kids like to make me worry I'm raising overly entitled children, even a simple pasta dinner has to come in two styles. (Magpie won't eat red sauce, even on pizza. I accept this, but not without telling her it is an affectation she should lose sooner than later.) 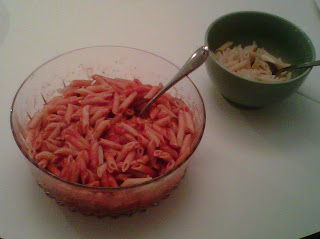 But even the Pasta Two Ways is easy enough to make, so no complaints from me.

And my kids? Big fans. 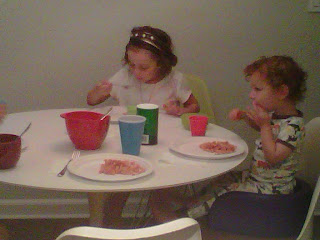 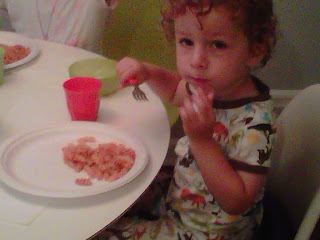 Thank you Barilla for the pasta samples.
Posted by Unknown at 5:39 AM

I didn't know those were available! I love this mini idea!!!!

Those are so freaking cute! My kids LOVE pesto pasta (won't eat red sauce either), and they will go nuts for these little shapes. (And they are fiber loves too, but they don't know it.)

Frankly, the little part is cute and everything, but the quick cooking part is what gets me. Seven minutes is about all I can take of "Is it ready yet? Huh? Huh? HUH?"