More Christmas Lights and If that Dog Could Talk

A few towns over is an amazing Christmas light display that was donated by the Camuso family after the patriarch of the group passed away, who had decorated his house for many years.

We didn't leave in New Jersey to get to see the original Camuso family home in all it's splendiferous Christmas glory, but we've been regulars every year to the display in Livingston.

In part we go every year to visit him: 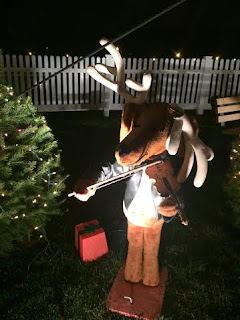 His story is a good one, and one definitely worth telling, but as the saying goes, it is a story for a other time. Also, despite the antlers, that is so a dog's face.

The Camuso decorations are incredibly intricate and handmade, and most of them are animontronic, the dog/reindeer above plays his violin; in another display there are skaters skating.

Several displays show Santa's Workshop, where toys are built and wrapped for delivery. 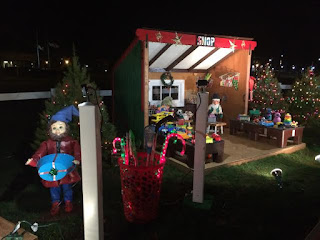 Not sure if this is an addition from the town of Livingston or part of the original display, but there's a nice spinning dreidel and a large menorah, right next to the Grinch peeking out of a chimney. 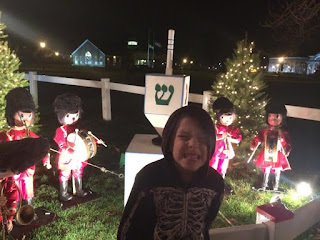 There's also a tall Christmas tree with a train running around the base. The tree spins making it by far and most definitely my favorite of all the trees I've seen this season. 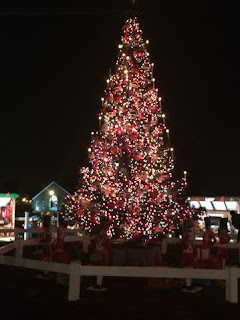 The story of the dog reindeer coming soon, or at least, soon-ish.
Posted by Anna Sandler at 11:07 PM No comments: Links to this post

On the first day of winter break... 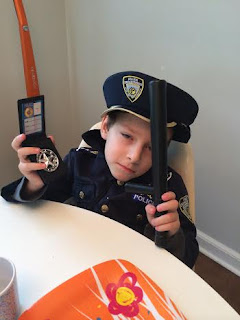 ... Sharpie the Pig's sty finally got evicted, ironically, when we finally got around to cleaning the owner's pig sty room: 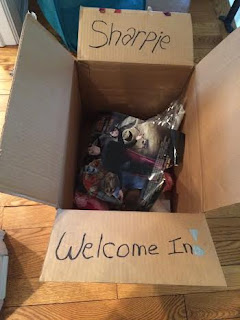 ... we found three marbles deeply hidden in the aforementioned sty, leftover from the days when these were the most prized possession in all the realm. Today? The tween declared with a sigh, "get rid of them." 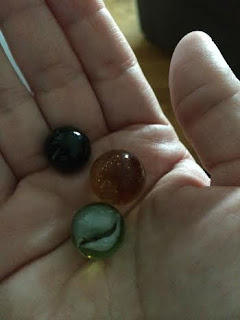 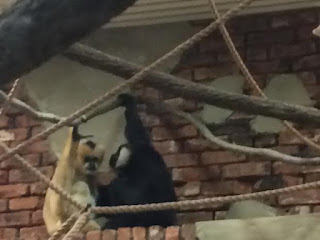 All in all, not a bad first day, especially for a Monday.

Posted by Anna Sandler at 10:24 PM No comments: Links to this post

The Lights Shine Bright... Deep in the Heart of Jersey

{Keep reading}
Posted by Anna Sandler at 8:15 PM No comments: Links to this post

We are a family that is always on the search for the best of... just about anything. Best socks. Best burger. Best pillows. You get the idea.

Last year at the holidays, it was a quest for the best stollen. We tried many - award-winning, classic, new-styled, fusion. The verdict was unanimous: we don't really care for stollen, no matter how good a version of it we get.

Two years ago, we vetted all the Italian Christmas cookies we could find.

A clear winning bakery emerged from all the ones we tried, but no consensus on which of these amazing cookies was the absolute best. If you're local in Jersey, the winner was Conca D'Oro Italian Pastry Shop in Union. Totes worth the trip.

Personally, I'm partial to the rainbow cookies. (Not pictured because I ate them all.)

This year, we're having an egg nog-off.

I'll be back with the winner after all the votes are in!

Posted by Anna Sandler at 4:38 PM No comments: Links to this post

AC Lens Has Great Ski Googles for Teens and Tweens

My oldest, Magpie, started skiing last winter, and loves it. This year she plans to ski a lot -- that is if it ever becomes winter weather here on the East Coast.

One piece of equipment I wanted to make sure she had was a good pair of ski goggles. We were able to review a pair of ski goggles from AC Lens, which Magpie says are really comfortable, and we both agree look great. These goggles are designed for smaller faces, so they are a great choice for tweens and teens. 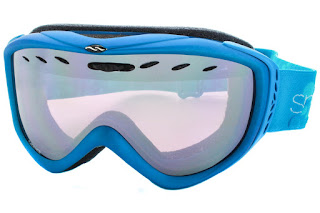 The Smith Optics Cadence Ski Goggles retail for $79.99 at AC Lens, and come with free shipping.

To see the goggles in action, check out this great video Mapgie made.


In addition to a wide variety of ski goggles, AC Lens also has eyeglasses, sunglasses, swimming goggles and a lot more. Check them out at ACLens.com.
Posted by Anna Sandler at 8:19 PM No comments: Links to this post

The Star Wars movies have a special meaning to just about everyone my age, I think because we remember seeing the originals in the movie theater when they first came out. And of course, back in those olden days movies meant something they just don't mean today in our world of media everything, everywhere all the time.

I personally have vivid memories of going to see the first Star Wars film. (Full disclosure: it is of being totally bored. In my defense, I was only five.) I also remember seeing the second and third films, in 1980 and 1983, when my older self had a greater appreciate for them.

And, I have a particularly happy memory of going with my mom to see The Phantom Menace, the fourth movie (really the first) on opening day when it was released in 1999. We didn't even go to see it in our local theater in suburban Virginia. Instead, I had us go see it on the giant screen at The Uptown Theater in Washington, DC.

There was a huge line to get in and I recall my mom chiding me "This is crazy! We can just go tomorrow!" And I remember saying back, "No, it's not the same, it has to be today! We'll always be able to say we saw it opening day!"

Sadly, I haven't been able to work this nugget of information into too many conversations over these years, but still, I believe I was on to something. The Star Wars movies are a thing, and it's great to be a part of the phenomenon.

Small children and other excuses meant I didn't see the Star Wars films that were released in 2002 and 2005 until recently when I watched them with my kids (ages 6, 10 and 12) in preparation for seeing the latest film, which we will go to see (symbolically, and memorably, of course) on Christmas Day.

Lots of people, us included, are celebrating the latest film's release with parties and treats and my friend's kids even celebrated Star Wars Day today at their school.

As for my kids, they got to enjoy Star Wars cereal, which was a huge, gigantic mega hit. But don't take my word for it, watch this amazing video by my daughter, Magpie that shows us unboxing the huge care package from General Mills Big G cereals. All of these cereals are special edition, and come with very cool droid viewers, so be sure to try them before it's  too late.

Now tell me, are you going to see The Force Awakens?

I rarely review products these days here at Random Handprints, so a special shout-out to the Public Relations people on this campaign who made it incredibly awesome to be a part of this, from the initial email addressed to "Jedi Anna" to the box filled with surprised that arrived at our doorstep. As Yoda would say, "Impressed am I. Well-done this is."
Posted by Anna Sandler at 1:53 PM No comments: Links to this post

Sunday Mornings: Teaching to the Test 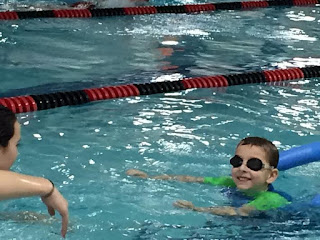 First, it was just the youngest, Ziggy, learning to swim. He was beginning at the beginning, so it was slow going for awhile but he is now a pretty good swimmer.

Now, the older two, Magpie and Kay take swimming lessons, too. They took lessons a few years ago, a splendidly splendiferous experience which is mainly now just remembered as the reason we now still call Kay "baby fish," because instead of trying to learn to swim she would pretend to be a baby fish. Ah, good times.

But last summer, at sleepaway camp, indignities of indignities, Kay was forced to take "instructional swim" while her friends splashed about carefree as well, baby fish, in "free swim."

Making the goal between now, and the time the camp bus pulls out of Times Square at the end of June, for the girls to swim just well enough to pass their test.

The instructor is aware, as the girls have told them in no uncertain tween speak, "we don't care AT ALL about swimming. Like, AT ALL. We just need to pass the camp swim test, so we need to make sure our breast stroke in in synch, that was what they said I failed for last time." "Yeah, and I have to learn something called... the sideways stroke."

So, Sunday mornings we swim. Not for safety. Not for exercise. Not for the joy of the moment.

That's right, it is entirely for the camp swim test.

I just hope they pass.


Posted by Anna Sandler at 10:04 PM No comments: Links to this post

Back to Blogging: Holiday Edition

I've decided to start writing on my blog again. I know, it's like with these words your life has gone from black and white to color.

This photo is from this time last year at Rockerfeller Center. I want to say we stopped here first and then went to see the world-famous tree, but it was so crowded this is as close to the festivities as we got.

Also, we were mostly sorta-kinda-totally only in the city in the first place because the kids had to go to the dentist. 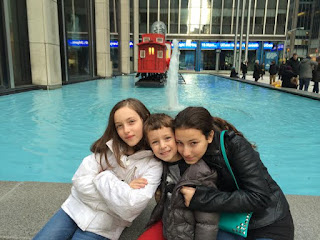 This year I went to SantaCon. It's my favorite. This photo is from a few years ago when I first learned of SantaCon and said, this - this, I gotta be a part of. 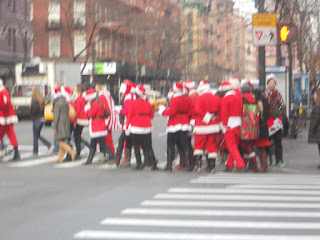 SantaCon is, I will admit, better viewed in the big picture.

Tonight my husband Mike and I were at the mall and oh-my-gawd the line to see Santa was soooo long.

As we passed by the line we looked at each other and said, "I'm so glad we're Jewish."

And that my friends is how you celebrate the holiday season: almost seeing the tree in Rockerfeller Center, dental appointments, Santa Con, and Santa-line skipping.

Happy Holidays however and whatever you celebrate!
Posted by Anna Sandler at 10:25 PM No comments: Links to this post