To My Beloved Magpie, On Your Eighth Birthday

My beloved daughter... how are you turning eight today? I feel like a robot on the verge of obsolescence, and while I know that is about me, and not you, I so can't believe you are old and wise -- as well as very, very tweeny -- already.

We all know it seems like just yesterday that we were bopping you around in our fourth-floor walk-up apartment in Manhattan, singing "you are my precious baby girl," while a two day blizzard raged on outside our windows and we explained to you that the world doesn't always look like a snow globe.

Those first days were so beautiful and full of wonder.

And let's face it, full of idiocy as well since you were the first-born of modern parents who had never even really seen a baby, let alone taken care of one.

I called grandma while I was still in the hospital, desperately worried I had broken your arm.

"Is she crying?" the always practical grandma asked.

"If she isn't crying, then her arm isn't broken." sighed grandma.

Your Dad and I also filled out our parents names on the hospital forms where it said "parents" instead of our own, but the full story of that gaffe is for another day.

All this is just to say, we had no idea what we were doing then, and we have no idea what we are doing now, but it all seems to be working out OK.  Because now, and always, you  have known exactly what to say and what to do.

You have also always been hilarious. And serious. At 8 months old, you lectured the other babies in day care so much from your make-shift congressional floor that the teachers started calling you The Senator.

In your first year of pre-school, when you were turning three, you were out sick for two weeks, and your classmates called every day to see when you were coming back - they needed their classroom representative to articulate their needs to the teachers. The welcome you received when you returned to school was huge, even for as semi-elected official.

The next year of preschool, your morahs told me cheerfully "if a child is upset, we send them over to your daughter, she always knows how to make them feel better!" And they told me a story about how one day a classmate spilled water all over her napkin and was really upset. When no one was watching (or so you thought) you spilled water on your own, and then said "Oh look, my napkin is wet, too..."

'Cause yeah, that's the kind of person you are.

So, could someone this awesome have anything they could work on?  Probably not. Well maybe just one teensy thing. You do have sorta a material bent despite my best attempts to steer you towards the spiritual path instead.

There's a story I love from a few years back when you urged your Uncle Ethan and your Uncle Stephanie ever so politely, "you might want to start thinking about what would be a good gift for a five-year-old girl." Oh, the tact! The subtlety!

And for the record, Uncle told me he has a totally good idea for a gift for an eight-year-old girl - just in case you knew anyone.

Happy birthday, little bear. I love you forever and a day. 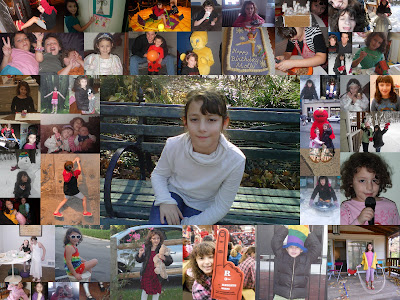 What a great post -- I love all of the nostalgic details forever captured. Happy Birthday to your lovely little lady.

Love this! The stories and photos are a fantastic birthday celebration.

A very happy birthday to your babe!

p.s. You know she's hilarious because you're hilarious, right?

Happy birthday! Had a cry over the love, admiration and respect you have for your child. She sounds truly special.

Ps we also filled out the hospital forms incorrectly, I had forgotten until your post!

As one who has known M her whole life, this lovely birthday message had me in tears. xoxo

thanks, kim! i cannot believe she's eight. or that she told me tonight she was "expecting a phone call."

thanks, i totally should have skipped getting her gifts!

i do sorta love the mother-daughter thing, unfortunately we share all our bad qualities, too.

thank you for that, and for always being there for our lil m.

thank you for that, and for letting me know we are not the only people on earth who didn't think of ourselves when we saw "parents name here."

So sweet. And congrats to you mama. Eight is my lucky number btw :)